In my younger days, my dad and I did a lot of bird hunting in the hills of Lynchburg Tennessee. I’m not sure why but we both had trouble hitting a single bird when the covey flushed. There could be 30 birds in a covey coming out of a clump of briars and we would both miss. After the rise, the miss, and a good bit of razzing back and forth, we settled into what we enjoyed most. It may have been out of necessity, due to our lack of marksmanship on the rise, that we learned to love chasing singles. Today there is a new fishing technique and it is chasing crappie in open water with the Garmin Livescope and introduces a new meaning to chasing singles.

Slowly the quail populations dwindled, and it became difficult to even find a covey, and the days of chasing single birds that scattered into the cedar thickets and throughout the briar and sage grass-covered hillsides in Lynchburg came to an end. Today there’s a new technique derived from the new forward scanning sonar like the Garmin Livescope. The technique, which I affectionately call chasing singles, was perfectly demonstrated on a fishing trip at the 2022 Spring Brushpile Fishing Media Camp on Dale Hollow Lake.

Livescoping For Crappie In Open Water

I had the great fortune of fishing with two of the best crappie anglers in the country Stephen and Chad Crepps. We fished just a few days before they were to compete in the American Crappie Trail National Championship on Lake D’Arbonne in Farmerville, Louisiana. They finished 13th against the best crappie anglers in the country. I had been informed that these guys could catch the crappie but had no idea that I would have a front-row seat to a crappie fishing clinic.

While I had heard of and seen videos of anglers chasing crappie with the Garmin Livescope, I had never been in the boat to see it firsthand. I did write an article about chasing crappie last year but that was chasing the schools while longlining through them. This technique was different and as I explain you will see how I quickly came up with the term chasing singles.

Picking And Choosing the Crappie You Want To Catch

The first thing I found amazing was the ability to pick and choose the fish you wanted to target. With a Killer Klatt colored Crappie Magnet jig rigged on B’n’M poles, Stephen and Chad would pitch their jigs into the cone of the perfectly dialed in Garmin Livescope and manipulate the jig into the crappie’s face where it would instantly attack, almost every time. This sounds like an easy thing to do but I will say without hesitation that it is not. I was able to get in on the action and learned quickly that this technique takes some practice.

Stephen ran the trolling motor, scanning back and forth to locate the lone crappie that was suspended just feet beneath the surface in 50 feet of water. Chad would then make the pinpoint accurate pitch in the direction of the crappie. Boat control is just one of the many facets of being successful with this technique and Stephen had that down for sure. Moving along at 1mph scanning the water and then reversing thrust to stop the boat’s momentum while keeping the crappie out at 30 to 45 feet is much harder than it looks. If the boat ran up too close to the crappie it would spook, and you would have to find another.

Learning To Distinguish Size Of The Crappie To Chase

These guys could determine not only the size of the fish but also the species. The first few fish we saw were bass. Stephen and Chad don’t target bass and would just make the comment that that’s a bass right there. Then finally Chad asks me if I wanted him to catch one of the bass. Sure, I told him, and the next fish was a bass. Chad made the pitch and promptly landed a close to 5-pound largemouth. Chad would land several bass, essentially calling his shot when he did, enough so that I can unequivocally say that you can learn to only target big crappie with the Livescope.

Learning to distinguish the species and size of fish that you are targeting is one thing. The most impressive thing that I saw was the teamwork displayed by team Crepps. Stephen caught his fair share of the crappie that day but his role when competing is boat control. Positioning the boat to target a single fish takes a lot of time on the water. Stephan would move along spotting crappie in a range that he felt was worth pitching a jig to, usually 10 feet or less. It was determined early on, through trial and error, that these fish were the ones that were more active. They would provide for a higher percentage of hook-ups. When single crappie of a pound or more was spotted Chad would make the pitch and usually hooked up shortly after. 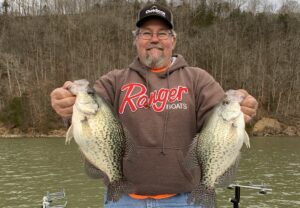 Knowing The Direction The Crappie Is Moving Is Important

A big part of lining up a pitch on single crappie was knowing what direction the crappie was swimming. Knowing this allowed Stephen to line up the target while also letting Chad know where to pitch. By knowing which way the fish was swimming Chad could lead to the right or left or pitch his jig head on short when the crappie was coming toward the boat. Or head on long when swimming away. Watching this in real-time and getting in a few pitches and landing a few crappie shortened my learning curve by hours on the water. It was a blast. I’m always honored to hang with some great anglers like Stephen and Chad from time to time. Aiming the pitch on cruising crappie isn’t that different than leading the shot on a quail. Back in the day when we were chasing singles.

When Crappie School Up and Suspend In Open Water

There are times when crappie will school up and suspend in open water. When the baitfish are in open water to feed on the phytoplankton the crappie is not far behind. It’s the natural food chain in action and the best time for chasing crappie in open water. When crappie is schooled up and following open-water baitfish, they can be difficult to locate. In years past, spider-rigging and longlining have been a couple of popular methods for catching suspended crappie. These techniques have evolved into precision tactics that flat out catch more crappie.

Electronics has been a huge part in fine-tuning these techniques. Gone are the days of flasher units and big fish symbols scrolling across the screen. Today, fishing technology is progressing as fast as that laptop you bought last year that’s now obsolete. Each time a new upgrade or feature hits the market I find myself saying “OK. That’s it. There can’t be anything better than that.” Well, I’m going to stop saying it because there seems to always be something new coming out in the trolling motor and fishfinder world that makes locating and catching more crappie possible.

Livescope has got to be the most exciting thing to hit the crappie fishing world since spider-rigging. With Livescope, crappie can be seen and even-sized from the image on the fish finder screen. Anglers can even determine if the crappie is interested enough to bite. If it isn’t they can move on to find another crappie to target.

I had a chance to watch the scanning Livescope transducer in action with Cornfield Crappie Gear Pro Staff Member Dean McCoy on Dale Hollow Lake. We did well chasing crappie in open water using a motorized Livescope transducer mount. The crappie was scattered in 30 feet of water along a bluff where shad and alewives congregate. Thankfully there were several different schools of crappie that day. After catching a couple of fish from a school, which tends to scatter them, we were able to quickly locate another. I found it comical chasing schools of crappie around, that is until a 2 pounder slammed my hair jig.

The other boats in the area must have been wondering what we were doing because when you have the LiveSweep moving along in a straight line is a thing of the past. No more randomly bumping into a school of crappie. You are actively searching the water column in all directions. When the school, or sometimes single crappie, is located you can troll right to it. It will change the way we fish for crappie in open water.

Many Advantages To LiveSweep Transducer Mount

Of course, there are plenty of other advantages of having a transducer mount that you’re able to scan. Using a foot control or key fob. This leaves your hands free to set the hook or make a cast. I can tell you that it works for locating and catching open water crappie. It eliminates the need to meander around until you bump into a school. Now you can search for much more water and locate the fish a lot more quickly. I would say that was it, they can’t top that, but I will wait.

Check Out Tips For Longlining For Crappie

Crappie in the Winter

Crappie in the Winter on Mississinewa Reservoir While most of us are waiting for the spring crappie bite, one angler has not let the snow melt. Leavell McKinney, bundled in ice fishing attire, fished February […]

Wading For Crappie : Fishing Shallow for Springtime Crappie Wading for crappie has become a popular way to catch shallow water slabs in the spring. While wading for crappie is not a new phenomenon it […]

What is the Double Minnow Rig The double minnow rig consists of 2 hooks, an in-line or 3-way swivel and an egg or barrel sinker. The hooks, usually gold Aberdeen crappie hooks, is tied 18 […]