I want to start this review with complete and transparent disclosure. I’m not a shooter I’m a hunter. This review of the Henry 44 Mag Big Boy rifle will be from a perspective of a lifelong hunter, from a view that guns are a way to harvest animals. No hand loads here. If a rifle can’t shoot factory ammo well enough to harvest animals it don’t make the cut. In fact I’ve been known to return or sell a rifle that failed to group accurately with a couple different loads.

I’ll experiment with a few different bullets to see about a little better group, but the rifle needs to start by showing that it can at least hit the vitals at 50 yards with any round. There have only been a couple guns in my life that I thought didn’t shoot well enough to hunt with. The Leverevolution ammo will kill animals, but there seemed to always be at least one flier with each group. The Winchester didn’t have any, so why not go with the Winchester ammo and save a little money?

Again I’m a hunter not a shooter. If you’re critical of people that don’t use highly technical terminology like chrono speeds and trigger weight then move on. This ain’t for you. I hunted for 30 years with many different guns including expert marksman in the Army and never even heard of trigger weight. Now days that seems to be a topic with every gun review out there. Won’t be any trigger weights here. No idea if the Henry 44 Mag Big Boy has a heavy trigger or a light trigger. One thing for sure, it’s no hair trigger and that’s fine by me.

My first impression of the Henry 44 Big Boy rifle out of the box was “Hey I’ve got to get to the range.” The rifle just screamed “shoot me, shoot me” and it screamed loud and clear. The lines were sexy and the look was rugged. Like a parlor girl you couldn’t wait to see after weeks on the trail. The weight was great, but comfortable and it proved to come in handy opening morning with two offhand kill shots. The weight felt great and helped to stabilize the rifle for accurate offhand shots.

The American walnut stock and forearm are solid in the hand with no looseness or rattle. It’s as solid as can be. The checkering is meticulously engraved into the forearm and stock giving an excellent grip even with wet and bloody hands. I was field dressing my first deer when the second walked into range for an easy 25 yard offhand shot. The walnut and the checkering on the Henry Big Boy Rifles give it a classic look that anybody can appreciate whether shooter or hunter.

My Henry Big Boy 44 Mag was ordered in steel. A hunting gun. Plenty of people hunt with the brass big boy, but I couldn’t do it. Not sure I’d even put myself in that predicament. Two reasons for the steel finish. First I couldn’t take the brass gun into the places that I hunt and feel good about it. I’d be constantly worrying about the rifle and I don’t want that, not when I’m trying to hunt. The other reason is kind of like the first. I think a little rust and pitting that might make it onto a blued rifle is just character while any kind of tarnish, scratch or blemish on that pretty brass receiver would be a travesty so I stick with the down and dirty steel.

AT THE RANGE WITH THE HENRY 44 MAG BIG BOY RIFLE

I couldn’t wait to get to the range with my new Henry Big Boy and see if it shot as good as it looked. It was only 3 days before the opening morning of Kentucky’s gun season and the Henry .44 Mag Big Boy’s debut. A skinner peep sight was ordered for the Henry, but I wanted to leave it factory for the first season. I wanted to give an out of the box Henry 44 Mag Big Boy review. I left the factory buckhorn sights installed. The buckhorn sights from the factory worked great. The Henry was sighted in and ready for the opener.

I love this rifle so much. I’m very picky about my sights since I hunt gnarly swamp bottoms and thick woods almost exclusively. I’m pretty hard on rifles and bows and anything attached to them which is why I plan to install the Skinner peep on this gun.. If you hunt out of nice shooting houses then there might not be a problem. To be clear I am for all hunters and don’t judge those that hunt out of nice blinds and shooting houses. In fact I hope to have me one on my little 7 acre property for next season. A place I can slip in when in a hurry or wake up late or if it’s raining. Any way you can get outside and enjoy “the hunt and the harvest”  then do it. 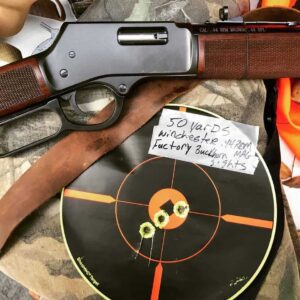 Once I had the sights set I started to take shooting the Henry 44 Big Boy seriously. It was surprising how well the rifle grouped at 50 yards. Not because I doubted the Henry, but my own marksmanship. I’ve not shot open sights for many years maybe 25 years since I shot my M16 and they were peep sights. I did have two types of ammo to try. A box of Winchester soft point. I was looking for the LEVERevolution ammo and couldn’t find any so I bought the Winchester. It was much less expensive. Unfortunately, I found a box of LEVERevolution ammo. It cost more, but I knew I wouldn’t be hunting with it after 6 shots.

Now all you shooters out there go ahead and jump me for “not breaking in the barrel” or whatever else I did wrong. When I shot the Winchester ammo the groups were much better and consistent from the start. These were the bullets I would use to hunt with. I have about 30 rounds left and they will last me several years. I always shoot 3 rounds before the season to make sure everything is good and that is all I will shoot. Any other round I shoot will hopefully harvest a deer or two. Here is the group I shot after getting the sights situated.

IN THE WOODS WITH MY HENRY 44 MAG BIG BOY

The Henry felt as good as it looked on my shoulder picking my way through the tangled swamp opening morning. The weight helped keep my Run & Gun Sling anchored to my shoulder. It felt like my first deer season when I shot a lever gun with open sights. I grew up hunting with a lever action Marlin. That was back before they were cool. Kids at school made fun of my lever action, always asking why I didn’t shoot a Weatherby or Browning bolt action with a big scope.

Growing up hunting big farm country in Lynchburg, Tennessee, long shots were the norm. I did envy their nice bolt action rifles, but my dad give me his lever action Marlin and I wanted to hunt with it. Later I put a scope on it, but I installed see-through scope rings. I never wanted to be without a sight. That rifle went to Alaska and hunted Blacktail deer in the rainforest with me. Needless to say the lever action has always had a place in my heart and this Henry would replace that void, and it felt good.

There is something about a lever action rifle, to me anyway. I guess I’m nostalgic about these things. After hunting with a bow exclusively for 20 years it feels good to get back into rifle hunting. Something I haven’t done since I was a young man. As a bowhunter close-up hunting is my thing. The Henry lever action 44 Big Boy not only exudes nostalgia but also challenge. With open sights hunting in swamp cane and old-growth oak trees, nearly anything that comes within sight is within range of the Henry. It just isn’t easy to explain the feeling of the lever action rifle to those that don’t feel it themselves. Like a fine Tennessee sipping whiskey, brewed just over the ridge from my childhood hunting grounds, some will never understand.

I have to say that loading a rifle has never been a big deal to me. Again see my full disclosure above. As a hunter, I have never worried about how a rifle loads. A single shot would be fine with me. I’ve heard from a couple of friends and read about some hunters that dislike tube loading. I’m not sure where the issue lies. If you load your rifle that morning to deer hunt and you need to reload anytime that day either you have enough deer processing to do for one day or you need to get back to the range.

The Henry 44 Mag Big Boy holds 10 rounds! Now as I learn more about the lever action rifles Henry is putting out I have learned that the way they get such good accuracy with their long ranger models is because the clip allows them to use a tighter receiver. Or something like that. The way it was explained to me made sense so I believe it and the guy was a shooter so I’m sure all the technical stuff was correct. In that case, it would matter how a rifle loaded. I like accuracy with the long-range rounds and out past 100 yards I feel that anything that can improve your accuracy is important.

The Henry lever action 44 Magnum Rifle is a hunter’s gun for sure and I would say it would make a great gun for shooters as well. It is fun to shoot that’s for sure. It’s equally fun to hunt with. It looks good when you want to show your friends or grandkids. It looks so good that it will make them want to go hunting. If you love to hunt thick woods and get in close the Henry 44 mag is the perfect gun. Yea there are plenty of other calibers and I love the 30-30 but this is a HENRY 44 MAG BIG BOY review and I like it. Plenty of power not only for crushing bone and making a quick kill but also to barrel through some limbs that seem to always be in the way in the thick stuff.

I would highly recommend the Henry 44 mag big boy rifle to anyone that loves nostalgia, close-up hunting, and all-out sexy guns.

About Ken McBroom 215 Articles
Ken McBroom is an accomplished outdoor writer and photographer. Growing up in Lynchburg Tennessee allowed him many opportunities afield as a boy and young man. Later in life, after Desert Storm, Ken’s wanderlust took him to Alaska to live and work and experience the last frontier. Married now with two beautiful children, Ken now calls Kentucky home where he continues to communicate our American outdoor traditions and the lifestyle it offers.
Website Facebook Instagram Twitter LinkedIn

Hunting With A Henry

Hunting With A Henry by Tom Berg   There is just something about hunting with a Henry lever-action rifle that stirs my soul.  I like the way they look and the way they feel.  I […]

Buttermilk Squirrel Recipe with Biscuits and Gravy Squirrel, biscuits, and gravy with mashed potatoes and homegrown tomatoes. Don’t get much better. I remember as a boy bringing home a limit of squirrels and wanting them […]