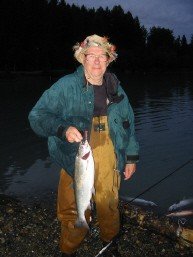 My journeys thus far have led me down many paths and with many anglers across this great land of ours. One person that comes to mind is a man named Ed Pease. Ed is 77 years young to date and still going strong, he is a lifelong angler. He makes his way to Alaska each fall in pursuit of Rainbows and Silver Salmon. I met Ed personally after seeing him casting a fly into one of his favorite runs. It was depicted in a watercolor hanging on the wall of Gigglewood Lakeside Inn, a Bed and Breakfast where I was staying the summer. Linda, the owner of the B&B informed me that the man in the painting would be up to fish in August and that I should meet him. So I did.

I was fishing a rather large creek that just happened to be the one in the painting. I wasn’t having much luck when I noticed some anglers wading toward me from upstream. The nearest angler turned to work the pool above me and it was then that I realized it had to be the man in the painting. I later learned it was the very pool that was rendered in the watercolor.

Ed is a lifelong angler, although far from a young man, Ed pursues his passion relentlessly. Four to five weeks each fall you can find Ed angling Alaska’s rivers and lakes in search of something but few will ever understand and many are still searching. Searching for that drift of the fly, the flowing water of a river. Searching for the strike of a Silver Salmon as it leaps from the depths of a well known run. Perhaps it’s the camaraderie found among friends at 3 am joking about bears as we embark on a mile long journey, in the dark, down an even darker path along a salmon choked river or creek.

Ed walks the trail alone as he is let out while the boy’s park the truck. You can see Ed’s hat glisten as the headlights pan across the many flies that adorn it. One might stock their fly box with the flies that drop from Ed’s hat along that trail and if the lucky recipient actually tied one of the colorful flies on they would find out that the fly isn’t just pretty but effective as well. As for me I tend to leave the flies where they lay just in case its Ed’s way of getting back to the truck.

Only Ed can say for sure what it is that motivates him into such pursuits that are far from easy for any man. Rising at 2 a.m. in order to beat the crowds after fishing till late the night before. Then trekking a mile or more to the hot spots on a bum hip and landing as many, if not more, big fish than the rest of us. You should try catching several Silver Salmon in rapid succession in a swift current. Fun for sure, tiring for surer.

Many may wonder what the lifelong angler sees in such pursuits. I assure you that the lifelong anglers of the world know for what they are searching. Because they have already found it. Explaining the feeling or reasoning is usually futile at best. Many, myself included, have grown weary of trying to describe the indescribable.

I have been informed on many occasions that as you grow older your passions change and your priorities get shuffled. My response is that if the fueling of my fire for hunting and fishing ended today it would take more than my lifetime for the fire to go out.

Last season Ed was hand lining for striped bass in the Atlantic Ocean! That’s right, he was pulling 10 to 30 pound striped bass in with his hands. Ed was trolling off the coast of Massachusetts. This year who knows? It is the lifelong anglers such as Ed that give me hope that my passion for fishing will be as strong in the future as they are now and that at age 77 I too can get to the hot spots and cast a fly to a stubborn Coho or a rising Rainbow and be able to land it when I hook it.

Ed said last year it might be his last trip to Alaska. He was promptly reminded that he had made that statement for at least five seasons. As long as the passion is there Ed will be landing Coho and tying god-awful flies that actually catch fish. The passion in many anglers is stronger than aching muscles and joints. The only time the pain subsides is on the water with rod in hand and a fish on the line. I hope to see Ed again on the salmon stream. We can compare flies and tall-tales and enjoy a passion that will continue in the hearts of many well past any of our time here on earth. To Ed Pease of Massachusetts, we salute you as a Lifelong angler and unsung hero to our cause. Thanks for sharing the clean water.

NOTE: The reference at the end “Thanks for sharing the clean water.”  has a story all its own.