Amazing Is the Word

I can remember as a boy getting up at daylight and watching the sun rise over a frosty meadow as I walked a fence line in search of a squirrel or two. My first little patch of woods was a pioneer cemetery and there was usually a squirrel or two there to get me started. I carried my single shot 16-gauge Winchester in the crook of my arm and was fortunate to have several hundred acres to hunt. It was what I loved the most about growing up in Lynchburg Tennessee. Those great memories are heavy on my mind as I plan for my nephew’s first squirrel hunt.

Rylee is 12 years old, about the same age that I was when I hunted squirrels in Tennessee. He calls me Uncle Kenny. Rylee has been a very active kid from day 1 and I knew that he wanted to hunt so I made plans this Christmas to take him. I gave him a 20-gauge single shot shotgun for Christmas, and he couldn’t wait to get in the woods. I knew where there was a lot of squirrels, and it required a boat ride and a little more adventure for his first hunt. Rylee wanted to go at sunrise, so we did. As we motored across the lake to the hunting grounds, I asked Rylee what he thought about that sunrise? He said, “It’s amazing.”

The squirrels were not moving at all that morning. Rylee was able to make a stalk on a couple squirrels, but they were too close to their den and quickly eluded him. That first morning Rylee wasn’t able to get his first squirrel, but he had been on his first hunt. He learned about deer signs like trails and buck rubs. He learned about turkey scratching and squirrel cuttings on the ground and that all these signs would help him in his hunting success and that there was more to hunting than killing. He saw several deer and as he watched them trot down a ridge, he mumbled something under his breath. I asked him what he said. He pulled his face mask down and whispered, “that was amazing.” 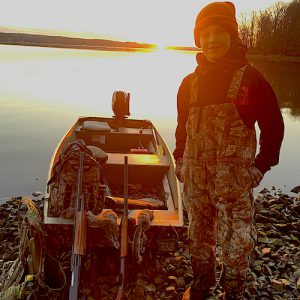 We came home for lunch and Rylee told everyone about what he had learned and seen. The excitement was reminiscent of my first hunts as a kid. The sun was out bright that evening, and the squirrels were too. As we entered the woods, we could hear the many sounds that squirrels make, and I was able to explain to Rylee what a squirrel in distress sounded like as a bald eagle flew over, and many squirrels scampered up a tree to announce its presence. Then what it sounded like when the squirrels went back to digging for the nuts they had buried in the leaves back in October and November. I heard a squirrel or two begin to gnaw at a nut and after directions Rylee finally could make out the sound and now knew what to listen for. I asked him if he could now hear just how many squirrels was around him, and there were many. He nodded a yes then whispered, “amazing.”

I was able to explain to Rylee how to listen and figure out where the squirrels were and choose one to stalk. He was on his own as I stayed back and watched. It was as if I was hunting the squirrels myself as he made his way slowly through the woods learning now how to spot a squirrel, all on his own. I was in a ditch and couldn’t see the squirrels, but I could hear them all around. I knew there was a good chance that Rylee would get his first squirrel on this evening. I probably could have guided him and helped him get that first squirrel and maybe more than one, but I decided to let him figure it out.

Many stalks were made, and I was impressed at Rylee’s patience as he moved to within range of a couple squirrels but didn’t see them in time to get a shot. Rylee worked his way up the ridge, and I was now on level ground but far enough away we were not communicating when I saw a squirrel scamper in front of him. Rylee froze motionless. I could imagine what was going through his mind only because I was once in his position many years ago standing in that old pioneer cemetery in Lynchburg Tennessee with my single 16.

The squirrel was hidden but I knew it hadn’t gone far and was probably just on the other side of the tree it ran to. Rylee slowly began to ease a little closer to the tree but was looking around for other squirrels. He had yet to learn that if you see a squirrel go around a tree and never see him leave that tree then he is still in that tree. Rylee thought the squirrel was long gone. I knew better but only watched as the lesson played out. The new hunter had already learned a lot about squirrel hunting and this lesson would be added to the list. 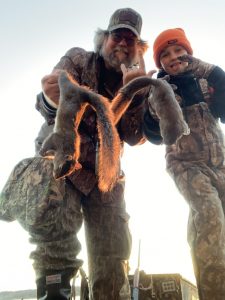 As Rylee stalked through the crunchy leaves, I could tell he had been listening to my instructions. High steps to not drag his boots through the leaves was the first lesson he received that morning, side-stepping when he felt a stick underfoot was another. He was moving slowly too, something we had trouble with that morning. He was using the two-handed carry, something he learned taking the hunter safety course. Everything seemed to be coming together quickly for him now if only the squirrel would offer a shot.

Finally, it happened. The bald eagle from earlier made another pass overhead sending many squirrels scampering for safety. As the woods erupted with squirrel barks and chatters, Rylee didn’t know what to do or where to look. Then the squirrel Rylee thought had eluded him reacted to the other squirrels and circled the tree right in front of him. Rylee knew just what to do with that opportunity and cocked his shotgun and made the shot. Rylee could care less about any other squirrels in the woods as he ran to get his first squirrel from the base of that old hickory. The look in his eyes was all it took to know how excited he was, but his excited voice yelling “Uncle Kenny, Uncle Kenny, I got my first squirrel. I DID IT!” was the icing on the cake.

Once he settled down and I was able to make it up to him the smile on his face made me smile. He went into the whole story as if I didn’t just watch it happen. I could hear many more squirrels that Rylee was oblivious to. He had his first squirrel and that was all that mattered at that moment. When he completed the story of the stalk, we exchanged fist bumps and a moment together on a Kentucky ridgetop, a place where many first hunts have happened.

I took a few photos making sure Rylee had a great pic of his first squirrel. I probably took 50 images while he assured me after the first one that a picture was just a picture, it doesn’t really matter. I just smiled knowing that he would thank me later for these photos.

The sun was setting, and those other squirrels would have to wait as Rylee was anxious to learn how to clean and cook a squirrel. He had already had squirrel and gravy at Uncle Kenny’s house before and couldn’t wait to have it again, but with his harvest. As we were idling out from shore to head down the lake to the boat ramp the sun was shining orange over the horizon. I asked Rylee what he thought of his first day of squirrel hunting. He turned with a smile he could not erase and said, “It was amazing.”

How To Hunt Squirrels In The Spring