Swimbaits might be the rage when it comes to bass fishing, but swimbaits are an often overlooked tactic for big crappie. Big crappie eat big prey. Unlike smaller crappie slabs prefer a large offering. Swimbaits fit that bill.

There are those that believe in the cliché “go big or go home” when it comes to crappie fishing. I’ve met a few die-hard slab seekers in my day. None of them ever mentioned little grubs or a bobber and minnow. The true slab seekers are those that toss back 14-inch crappie in search of monster slabs. While I have used crankbaits to target big crappie this article will explain a more versatile way of putting some giant crappie in your boat.

When an angler hears swimbait their thoughts quickly go to big bass. Rightfully so. However, there are a few anglers that have applied the swimbait tactics to entice really big crappie. These tactics will get bites from big crappie when nothing else will, but don’t expect a lot of bites because small crappie will usually ignore it. What you are searching for with a swimbait is the alpha crappie.

Where To Fish Swimbaits For Slab Crappie

Big crappie will travel with smaller crappie; however, they usually prefer to hover a few feet above the school. This allows you to target big crappie and pick off a couple giants before moving on to locate another school to fish. Crappie will school up this way in the summer in open water as well as near structure or cover, like rock and wood. Using swimbaits for crappie is a good way to target the bigger ones above the school.

There are times when big crappie are more solitary. I’ve found this to be true in the fall when shad are moving into the back of creeks. This shad migration is widely known to attract bass, but it also attracts big crappie. This can be a great time to throw a swimbait into cover searching for those lone giant slabs ambushing shad. This is a time when big stumps and logs can hold some really big crappie waiting to ambush fast moving shad by quickly darting from their chosen cover for an easy meal.

In the summer a great way to entice big crappie to bite when using swimbaits for crappie is a free fall. It is a do nothing presentation. Crappie will suspend along bluff walls in the summer. They have easy access to deep and shallow water with very little movement. During dawn and dusk these slabs will move up close to the bluff to feed. They trap shad against the rocks as they make their way to the creeks in the evenings.They will migrate back out to open water in the mornings. Look for little ledges where the bluff transitions to a more gradual bank. Slow roll your swimbait over it and let it fall with the contour of the bottom. These little ledges among the bluffs are magnets for big crappie in the summer during low light conditions. They become even better when brush is present.

In the fall, as mentioned above, big crappie tends to be loners and prefer to ambush prey, much like a bass. This is a great time to cast to cover and slowly work your swimbait through it. Expect a violent strike as slabs are a lot more aggressive than smaller crappie. There are times, when crappie are really active, when you can find a stump or log they are using to pin shad against as they move down the bank. When this happens, you can anchor and cast to the same spot and catch several crappies. It can be boring throwing to the same stump over and over, but it makes it all worthwhile when big crappies are annihilating your swimbait. 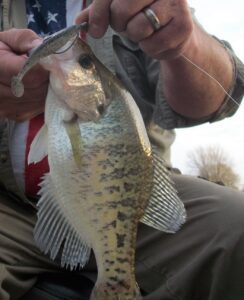 Big Crappie will Ambush Your Swimbait

There are times when big crappie will position themselves on isolated cover to ambush bait as it goes by. These isolated stumps, rocks, logs and laydowns become ideal cover for big crappie. Visual targets along the bank have always been the main cover that anglers hit. Today with side imaging and forward scanning sonars will allow you to scan hidden ambush points along the shoreline. Always cast your swimbait to any cover you see. Even big crappie can be hard to see with sonar when they hug that stump tight waiting for a meal. Casting to these ambush spots can produce a slab crappie when you least expect it.

Personally I like to cast and reel with a boot tail or twister tail grub. The vibration stimulates the lateral line on a big crappie causing it to strike. I’ve met a serious swimbait crappie angler or two that says that a free fall presentation is their favorite way to fish a swimbait for crappie. Not only did they tell me that they preferred the do nothing presentation, they also used a straight tail swimbait. I saw some of the crappie they caught. They didn’t always come back with a crappie but when they did, they were giants. Their claim was that the straight tail free fall presentation looked more natural than a swimming swimbait. This, they told me, enticed the bigger more weary crappie into biting. I dared not argue after seeing the crappie they caught but wondered if it was a confidence deal or not.

I did try it on a brushpile that one of these guys pointed out to me. It was in sight of my campsite and he told me that he had been placing brush in that spot for like 30 years. My wife, after just a few casts over this brushpile hooked into a giant black crappie that I estimated to be well over two pounds. It shook off as I attempted to lip it boat side because I didn’t have a net with me. This brushpile was not visible to the naked eye and we were using one of those straight tail swimbaits given to me by the man at the campground. He also told me that big smallmouth love this presentation and I hooked a nice 3-pound smallie on this same brush.

I prefer a medium light rod when swimbaiting for crappie. A crappie’s mouth is tender and is why they are called paper mouths. However, when fishing for big crappie with a swimbait I like a little more stiffness in the rod both for casting as well as sinking that hook into the crappie’s mouth when it bites.

If you want to catch more giant crappies and have a lot of fun doing it, try some of these swimbaits this season for some big crappie, I think you’ll like the results.

Another great article about swimbaits for crappie HERE

FISHING AT REELFOOT LAKE Reelfoot Lake is a shallow natural lake located in the northwest corner of Tennessee. It sits in Obion and Lake counties. Most of the lake consist of shallow water and swamp. […]

How To Catch March Crappie

Where To Find And Catch March Crappie During The March Migration In The South Spring is a time for crappie fishing. With March beginning to warm and cabin fever at its peak, crappie anglers across […]

Side Pulling Jigs for Crappie

Side Pulling for Crappie When it comes to crappie fishing very few things have gone unnoticed. Spider rigging was once just a few poles leaned against the edge of the boat in anticipation of a […]